Grammar Corner: What’s The Difference Between Course and Coarse?

When the English language contains many homonyms, homographs, and homophones, it’s only natural that some people get confused.

For example, the words “course” and “coarse” are two words with very different meanings, but because they are homophones (words with different meaning and spelling but similar pronunciation), it’s possible for some people to use the wrong word when putting it into writing. They could end up saying that sand is “course” or that they were treated to a dinner with five “coarses,” which doesn’t make a lot of sense.

In the case of course and coarse, one of these is an adjective while the other can serve as a noun or verb. The term “course” dates back to France in the 1300s with the Old French word cors, which is the forward motion along a path usually used to describe the flow of a river. It was also used a number of other definitions, hence its multiple meanings today. “Coarse,” on the other hand, originated from the late Middle English and its origins before that were uncertain.

The word “course” can be used as a noun (which, in turn, has plenty of uses) and a verb. As a noun, it can mean a lot of things, including:

It’s up to the reader or listener to use context clues and understand which one of these noun definitions are most appropriate for the scenario. As a verb, however, it only has one meaning: the original French usage of how liquid flows through. It can be used figuratively, like when you say a father’s blood runs through his child’s veins, and it can be used literally, like when you describe the swiftness of a coursing river.

A few more examples of the use of the word course:

A younger word in the English language, the word “coarse” is only an adjective meaning something rough, thick, and sparse – usually something of low quality from materials like fabrics or fur. During its early use, it was meant to describe something that was of ordinary or inferior quality.

Another less common way people use “coarse” as an adjective is to describe someone who is rude, vulgar, or acts socially unacceptable in certain cases. When someone reprimands you for your coarse language, they want you to tone down the vulgarity, cursing, or whatever they think is very unbecoming in your language. Other ways of saying it in this context include: 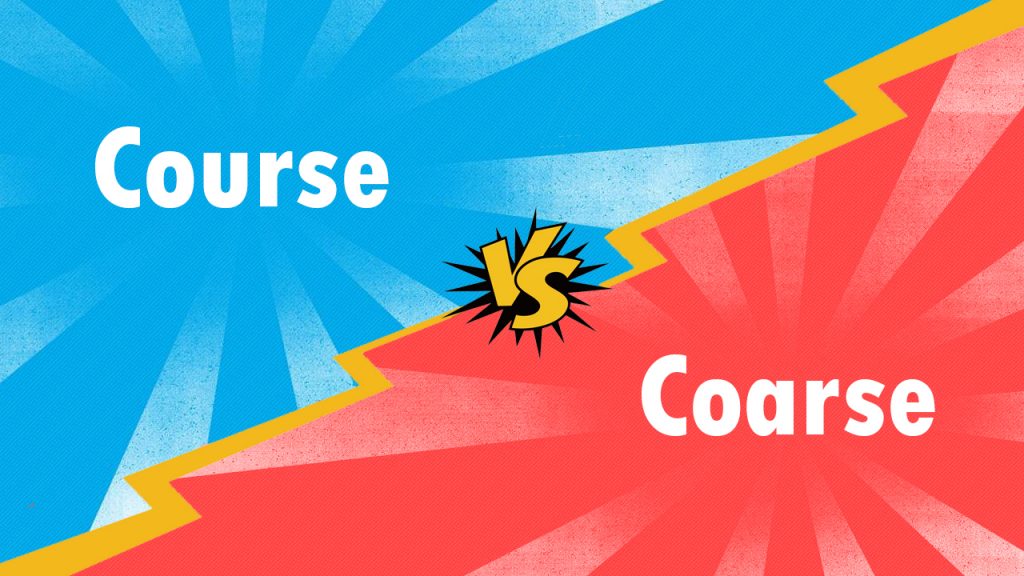 Let’s recap: course can be used as a noun with many definitions and one verb, while coarse is only used two ways, both as adjectives. To help you remember, look at its spelling and the differences they have: the word coarse has the letter ‘a,’ which can stand for adjective. If you’re using the word as an adjective, use “coarse.” But if you’re using it for one of its many definitions as a noun or verb, use “course.”

Let’s see if you’ve understood the lesson. Try filling in these blanks with the appropriate word.

PrevPreviousGrammar Corner: What’s The Difference Between Discreet and Discrete?
NextHow to Improve Your Spelling Skills: 5 Tips to Get Better at SpellingNext
Scroll to Top